Estimated Cost: $200
2 adults, 1 night, dinner at Riscky’s BBQ, a beverage (or 2) in The Stockyards, staying near Sundance Square, and shopping at Montgomery Ward. 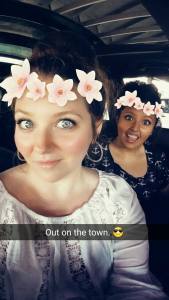 For my halfway point in A Year of Travel, I decided to do something different. As a regular tourist, I thought it was time to be a guide and to take someone new to someplace old. My friend Esther just moved back to the DFW (Dallas/Fort Worth) area after having been gone for a few years and, even though she went to and graduated from college here, she missed out on a lot of the area.

One of my favorite things is to have guests! I live in a prime area close to so many things that it’s fun to introduce someone here, as I too once needed to discover the city. I actually live specifically in Arlington, TX. Arlington is the midway point between major Texas cities Dallas and Fort Worth. That makes having guests extremely convenient because it’s easy to take them places all across DFW. Not to mention, I live in walking distance from AT&T Stadium where the Dallas Cowboys play and a short walk from there is the Rangers Ballpark where the Texas Rangers play. There’s also Six Flags and Hurricane Harbor water park. Arlington is a tourist city for sure and so accessible to everything nearby that I have a list of must see places for visitors.

It wasn’t long before I started to realize how little of DFW Esther had seen. She’s probably the most motivated person I know with the best work ethic. We actually met because I hired her as my intern and was consistently impressed with how sponge like she was, always eager to learn and try new things!  She was so busy working on her 4.0, several internships, and job that she failed to enjoy the freedom of exploring. Now that Esther was back in my neck of the woods, it was time to make up for lost time! What better way to do that than start with one of the most touristy places in Fort Worth – The Stockyards.

Esther is pretty into the cowboy scene so it was a no brainer. The Stockyards have quite a history here in Fort Worth. Part of the Chisholm Trail, and around since the late 1800s, this location was where cattle was driven to and livestock was shown/sold. These days, cattle is still driven down the original brick road but it’s quite modernized. Located just outside of downtown, there’s restaurants, bars, shopping, even a jerky shop with free samples.

If you’re observant, there are plenty of places before you get in the thick of it to park. It’s a short walk but you need to be prepared to walk anyway. You can pay to park randomly inside The Stockyards but why? If you’re not interested in walking, stay home. You’re going to want to park at somewhat of a distance because there’s people everywhere. Honestly it probably saves you time to park and walk because you avoid traffic of pulling down the small strip across The Stockyards and having to wait for the hoards of people to cross.

The first place we had to go was Riscky’s BBQ. I have been talking about this place for years because, well, it’s amazing. As a Georgia native, I did not grow up with a passion for BBQ. Texas, like Kansas, is very proud of their BBQ and there are so many BBQ places that it takes trying them all to really understand the nuances of nom vs non. Riscky’s has been one of my favorites since I first tried it in 2009. I particularly appreciate the responsible amount of fat in the brisket. I have been to places where I pulled out literally as much fat as meat in a small sandwich. That’s disappointing, unhealthy, and honestly gross. I haven’t had that issue with Riscky’s. My favorite location, due to it being nestled in the sweet spot of Sundance Square (a few miles from The Stockyards), is rustic and offers quaint outdoor seating a short walking distance from the best views in town – a parking deck. However THIS Riscky’s is in the perfect spot  it’s all the way on the end so by the time you get there, you’re ready to nom it up! There was a wait, after all this was a Saturday evening, but we could continue to check out the nearby shops because I got a text telling me when my table was ready. Even more helpful is there’s an app where you can see how far in line you are. I wasn’t that curious but the text was definitely nice.

After we ate, we felt free to continue walking around. I purposely waited until closer to sunset but try to come earlier, if possible. While it’s hot, there’s a lot more shops open and ready for business. The best thing about coming to this part of Fort Worth is there’s an abundance of souvenir opportunities. I went years ago and got an entrancing piece of street art. There’s lots of music and creative arts walking down the strip there. Music usually refers to country and western. Creative arts often includes anything cowboy related. There are longhorns and actual cowboys who walk down through The Stockyards. In fact, one of the reasons I love to take guests there is that is the quintessential Texas destination. It’s what non natives imagine Texas is like before coming here.

Even after all the times I’ve been, I think this was the first time I was there at night. I had no idea how lively the whole place was and beyond after dark. There’s so many bars, so many people, even several tattoo shops open super late. I’m not really a bar person but it was definitely fun to walk around see the country side of bars. I will say, Esther and I did have a couple shots at one of the bars where there was a $2 special. That was just the push she needed to get a new part of her ear pierced! We had quite the night out.

All in all, I think she enjoyed experiencing a new-to-her part of town. We had a great night and exhausted ourselves, which is what you need when you work in social media. Passing out was earned that night.

Stay tuned for my next trip to New Orleans for my birthday!