Estimated Cost: $400
2 adults, 3 nights, entrance to the museum and farmhouse, WWI National Monument, and other points of interest, dinner at Gates BBQ and other meals.

Months ago, I discovered the zone of totality and I knew what I had to plan for, seeing the eclipse in THAT zone. Originally, I had planned to ride out from Dallas and check out Casper, WY. However, that’s apparently a big hub for astronomy so I decided the 16 hour drive wouldn’t be worth it due to the extreme lack of hotel… as in none.

I kind of waited longer than I should of to decide where I wanted to see totality. I was going to go back home to Atlanta but then it would – eclipse – my ability to have a new destination, which is my monthly goal this year. So, after much debate, I decided on Kansas City. Why? 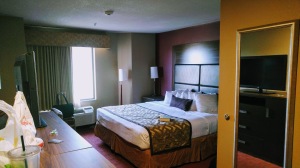 I decided to go a step further and add another new destination on the way, Tulsa! Any 90s kid can tell you that’s also the hometown of pop sensation Hanson so, it was right. SO, I left Saturday morning and 4 hours later, I arrived in Tulsa. I loved breaking up the trip like that so much, I’m definitely going to take longer trips with stops along the way. Anyway, I stayed in Best Western Plus Woodland Hills and I will say the lady at the front counter was so nice because I can’t tell you how often I put in the special requests, “Top floor, best view,” and it may or may not happen but no one talks about it. Here though, she talked with me for a while and let me pick. Unfortunately, there wasn’t much of a room either way but she tried and that was what mattered. 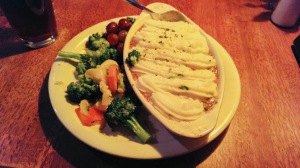 I may have just missed out but I didn’t seem to find much to do! I would love someone from Tulsa to tell me how cool their city is and I could go back and discover it properly! I will say I used TripAdvisor to find a place to nom and I had the best Irish food at Kilkenny’s. If you know me IRL, you know that I am an insomniac. As I write this it’s 3:30am. However, after the meat pie I had there, I was OUT when I got back to the hotel. I was so out I could not move, I could barely walk back to my soul. I had to push through because I didn’t want to take a togo box. MAN, I struggled but it was worth it. The food was delish and the inside was so full of stuff to read and look at on the walls. Going there was worth staying in Tulsa.

The next morning, I enjoyed continental breakfast and was on the road again! One thing that was annoying was how expensive the tolls were! To be fair, I didn’t realize I was getting on tolls so maybe it could have been avoided but not cool, Oklahoma. So, by afternoon, I was in Kansas City! Well.. that’s not exactly true. I was about half hour south in Peculiar, MO. Why so far outside the city, you ask? Well, because it took me so long to decide an alternative eclipse destination, EVERYTHING was booked. I’m so very fortunate Highland Inn had an empty room because I looked for days on both TripAdvisor AND Google AND Hotels.com to find something that wasn’t a crazy high price. But honestly 95% was sold out and what wasn’t was stupid expensive. So, I saw this as an opportunity to see more of Missouri than I meant to.

Fun fact: I often heard natives say, “Missouruh” as opposed to what I’ve always known, “Missouree.” I even talked to someone who mentioned the city of, “Miami,” as, “Miamah,” as opposed to, “Miamee.” That’s also how Truman pronounced it! Enjoyable in person. 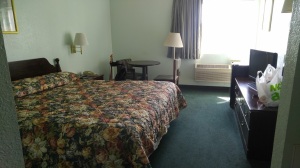 I was nervous about Highland Inn because Hotel.com had only the worst reviews. I was up against the wall, though, so I figured I’d have to find a way to cope. I will say, one thing was valid about the reviews and there is a heavy odor when you come in that many claimed was smoke. It wasn’t, it was fragrances and cooking from India. The owner was a very friendly and attentive older gentleman who was always in good spirits. He even was so kind as to encourage me to enjoy the fruit from the trees next to the building. It was quite delicious apples and peaches! Once you got in the room, the smell was neutral like any other hotel. It was also right off the highway, next to 2 gas stations, and a Denny’s with a Sonic across the highway. Convenience.

My first night I went to visit the WWI National Monument. This is the largest collection of WWI memorabilia in the world. It sits up high on a hill so when you to up to the top you’re overlooking the city and it’s magical. Admittedly, looking at the museum and reading about specific spots during the war was depressing. Mainly because you know so many years later that WWII will inevitably come as a result of the negotiations against Germany once WWI was over. What happened there set the gears in motion for another tragic war. All the sacrifices and the war went to war again. OK, moving on.

Now, it’s Monday and it’s eclipse time! I actually had the sad misfortune of leaving my eclipse glasses at home so you can imagine my panic. I called, on the way up, places in Tulsa and ALL OVER Kansas City. Much to my dismay, there were none anywhere because #storyofmylife. So, that’s 1 reason I HAD to go to Excelsior Springs, which was an hour north of my hotel. I needed to have as much time with totality as I could since I couldn’t look up until then. 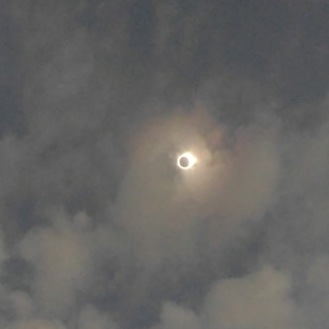 I oddly enough lucked out because it was a touch cloudy so I got to see the eclipse through the clouds! I made it to a small park about 15 minutes before totality. There were several other cars but a decent amount of people, not an overwhelming crowd like many other places. I have the fortune of a sunroof so I didn’t even need to leave my car. I stood up right there through the roof to ogle the sky. It was bright and sunny outside. Then slowly the moon slide in front of the sun and all went dark. At 1:07pm CST, my headlights came on and everything was suddenly night and everyone was cheering and clapping. It’s one of those moments you realize that there are some things bigger than politics, religion, ethnicity, preferences… bigger than ALL of us. No matter who was standing next to you, everyone shared this one historical, beautiful moment in common. Everyone was looking up in awe at this amazing sight of a moon with a ring of fire around it. Easily the coolest thing I’ve ever seen. Made me feel like I was in another planetary system because noway was this my daily view on earth!

2 and a half minutes later, totality turned into an eclipse again and I had to look down again. I have this photo here but feel free to check out #eclipse2017 on any platform and enjoy! With so many readers from around the world, it’s easy to miss out but I promise it’s worth the search.

After that, it was time to do something else history related and that was go to the presidential library in Independence. Luckily this was a work day so no crowds! I can’t express during the week and offseason enough. Anyway, there are many reasons to go here. If you are planning a trip to this Midwest destination, you will want to check it out. For one, Truman and his wife are buried here and the ashes of their daughter and her husband are across from them. It costs $8 to go in for an adult but if you walk in and say you just want to see the grave, you can do that for free. They are located in a courtyard in the middle of the building, which sort of wraps around it.

If you’re an enjoyer of history, you’ll definitely want to see the whole thing Once you buy your ticket, the best way to do it is to go immediately right and wait to go in and view the movie. It’s a short intro to Harry S Truman, his wife, Bess, and life before and beginning of the presidency. I also suggest if you’re planning a trip, watch Truman beforehand. It’s a movie about his life starting from when he got engaged to Bess and up until he came home after his term in office. So, after the movie, you start a well planned out walk through time periods of the presidency, which came into play at the tail end of conflict with Japan in WWII.

It was an insightful journey because it takes you into the time period with all the situations surrounding each decision. There was always a lot at stake. When he decided to drop the bomb on Hiroshima and Nagasaki, it was crisis. He believed that was the only way to stop progression. Later on, when he fired MacArthur, he wanted to contain and end the war in Asia with Korea. The general wanted it to lead into WWIII. There’s plenty more photos and stories of interest in my album here. The tour ends with entrance to the courtyard where Truman was buried, or you can keep walking around and even go downstairs. Highly recommend.

After, I had long awaited Kansas City BBQ. Living currently in Texas, BBQ has become a way of life. I can name 1 BBQ place I loved back in Atlanta and that’s Sonny’s BBQ. But here, it takes on a life of its own. There are MANY BBQ practitioners and the rivalry is KC BBQ. I was told before I left it was a very different type of sauce and I was excited! Unfortunately, I discovered I was not a super huge fan of it. It sort of tasted like ranch style beans, which I never had before moving to TX, and I dislike them strongly. I have no idea why and I can say that’s offensive to many Texans. However, the friendly people at Gate’s BBQ were so helpful and had the best fries and a tasty potato salad. Would still recommend. I went over into Kansas proper to try it!

Back in Missouri side of Kansas City, I took a fun walk around the Country Club Plaza. The streets were hilly but I had no issue finding free parking. This is a very walkable area with trustworthy crosswalks. It’s pretty artsy, lots of statues and water fountains. The buildings are colorful and the shops are varied. Mostly high end stuff, expensive clothing, Tesla, and luxury restaurants. It is a pleasurable walk because it sits on the river. I witnessed a couple enjoying a romantic dinner in a 2 person cruise. My favorite thing was the sister city bridge. It has flags of all the cities around the world that they are sister cities with. 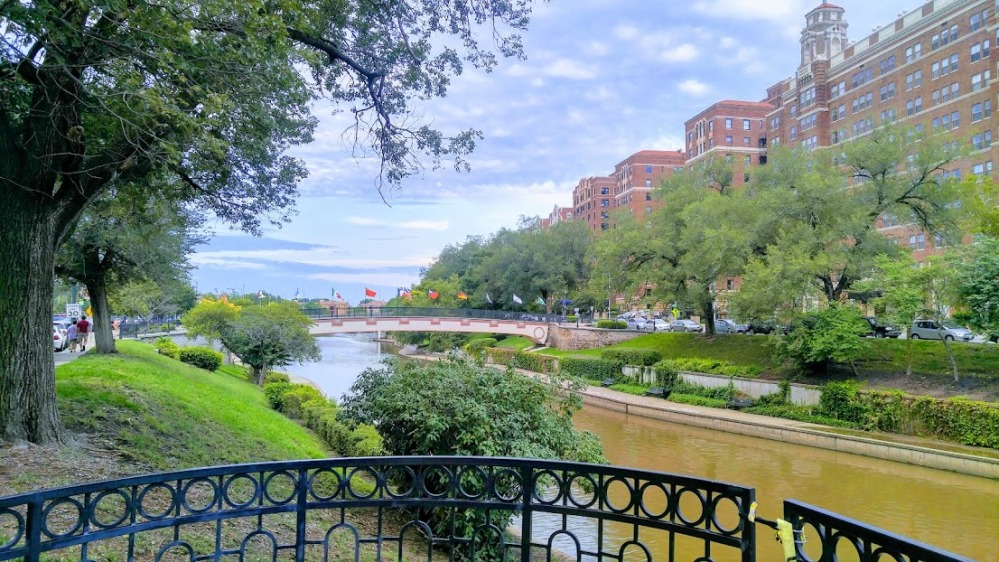 There is so much to see in Kansas City so I could definitely see me taking another trip there, perhaps on the way up to see Omaha. If you are from Kansas City, feel free to tell me more about your city! I’m looking for places to move next spring… you never know!

Stay tuned for September’s trip, which as of now has not been 100% determined. Keep on the lookout for updates. However, my trip for October is set and I’m going back to Europe! More info coming soon. See you next time!