Back in March, I started an experiment with my diet to investigate fluctations. If you’ve seen earlier posts from me, weight has always been an issue. In the 2+ years I’ve taken a different approach to losing weight.

Before I get started, I’ll let’s go back a tad so you can understand the struggle. I was first put onto a diet at age 7 for being chubby. The diet consisted of raw potatoes, raw carrots, and hot chocolate. Designed by my mother, I did lose about 7lbs. Any hunger pains I had were overshadowed by the fact that I did lose weight. I mean, of course I did. Anyway, in foster care, I was again put on a diet in a house where I lived with 11 other people. I was the lone, shy, chubby kid who was isolated because of my body. My foster dad was easily 400lbs and as funny as it sounds, he would eat dinner with the plate on his chest and would sort of shovel food in while watching TV. This was where it started, 2 diets by 9 years old.

In college I was in the gym 5 times a week burning so many calories and eating so smart. I had both a personal trainer AND a dietitian at the school who were helping me get that DREAM body. Years later, nothing had changed. I’ve been so distraught about my weight that I went to therapy and medical professionals seeking help. I even had a doctor hand me a brochure about how to eat less than 2500 calories a day, after I sat through tears explaining how I wasn’t able to lose weight and was eating 1200 calories a day and going to the gym.

Fun fact: most doctors believe you’re just overeating and not exercising if you’re complaining about weight. I get it, you get desensitized as a doctor and I’m sure there are plenty of lazy people pretending to not understand. Unfortunately, that means people like me never are taken seriously. So, about 2.5 years ago, I took maters into my own hands in the form of research. I was diagnosed as having Polycystic Ovarian Syndrome (PCOS) in 2012. I didn’t get much info about it from that doctor then when I went to other doctors afterwards, they didn’t take it seriously. I have more on that topic coming later but back to the experiment!

So, upon my research, I discovered a link between difficulty losing weight and PCOS. After all those tears I’ve shed over the years in frustration, I felt a weight had been lifted off of 1 shoulder. Maybe there’s a reason I haven’t had the results despite the effort? I also realized one of the pills that people experiencing this issue was one I had in my medicine cabinet, Metformin. Commonly used by diabetics, it’s used to help metabolize what you eat. More on that with the PCOS article coming soon but my mom had sent it to me. I complained about eating sweets and getting sick and she sent me that to help because it was related to sweets. I would take one whenever I ate something sweet or even pasta, the two things that would make me bloat into oblivion and pass out from exhaustion. There are still certain sweets I can’t have because they are so rich and make me sick.

I started taking those March of 2015. Within a couple months, I had lost 5lbs amd my body started to change. It sounds crazy but I felt like fat storage shifted, which in relation to PCOS, isn’t too far fetched. I am also proud to say I don’t turn into an oompa loompa whenever I eat pasta or sweets. Now, you may be thinking, “Doesn’t everyone get a little lethargic after eating a good, hearty meal of pasta?” Sure. What they don’t do is become so visibly bloated that they are in extreme discomfort that isn’t solved by sitting down and putting on stretchy pants. Needless to say, this was a major improvement. I was uncomfortable almost all the time and eating certain foods made it 50x worse.

Later in the year, I started a new initiative called #1MonthNoMirrors, you can read more about that here. But basically, I realized how cruel I was to myself based off my reflection. Years of effort to be skinny and I wasn’t really closer to it. The goal was to keep myself from being unnecessarily judgmental to my mirror image aka me. In my eyes, I was a whale but in reality I was just chubby. Honestly, I should of been grateful that my issue wasn’t gaining weight. Many people have issue of gaining, some can’t gain at all. My weight, while more than I liked, was at  least sustaining. Yet, I couldn’t help but pick myself apart very time I looked in the mirror.

My No Mirrors challenge extended for a few months actually. It was really a major difference to be not at all focused on how I looked below my neck. There’s much more to focus on in life than that so I actually lost weight from not focusing on how miserable I was with my body. Well at least, the fact that I wasn’t focusing on how “big” I was. So, that was another 5lbs.

Around that time I also moved next door to a park. I stopped paying for the gym and started enjoying the natural gym in walking distance. Why keep going to workout on machines when it does nothing for me? I waited for a month to sort of reset my activity level, the idea being start from 0. To my benefit, my legs have always been athletically inclined, which how could any doctor think I am not exercising? LOL I digress.

So, I lost another 5lbs from resetting and walking up to 2 hours a day. This takes us to the beginning of 2016 when I started incorporating a few extras to my exercise and using the LoseIt! app to watch my calories. I was slowly losing but I had a wedding to be a bridesmaid in come September. I needed to UP my efforts! I was introduced to Bodytox, which is a cleanse and pills. Essentially, you have a week of 4 drinks that make you want to die and then for a month you take pills.

I saw success in 2 others and waited months to try it myself. I was too afraid of the weight coming right back. However, by July, I had to do something drastic. SO, I definitely lost about 15lbs after 2 rounds of the tox. It worked so well I kept on for 2 more rounds to no extra avail. That brings us to the beginning of 2017.

OK, so by making small changes, and one serious product, I still wasn’t close to where I wanted to be. That brings us back to the beginning of this blog, March. I was weighing daily and fluctuating wildly. Why? I decided to keep informal tabs of what I was eating for a month and weighing each morning. I was not counting calories, just eating normally. At the end of the month, I made a list of foods I ate on days I fluctuated up, down, and stayed the same. I was looking for a pattern, any pattern. What was causing the consistent randomization of the numbers I saw on the scale?

Much to my dismay, through a rough analysis of the pattern, it would seem that my stomach may not agree with dairy. Most days I fluctuated up, I had an excess of diary and usually carbs. Days I fluctuated down there was more protein. That probably seems reasonable but a life without cheese? IDK. Excess doesn’t necessarily mean I was a glutton for cheese but just more so than the days I fluctuated down.

My first step was to buy almond milk. So, I haven’t had real milk since then. That was easy, I buy almond milk with a hint of honey and it’s delish! Now cheese, that’s another issue. I’ve had few and far between cheese for a few months. I get a bloated reminder my stomach doesn’t like it every time I have more than a tad. After the experiment, I did research and discovered that dairy also has an impact on many women with PCOS. A lot of what ails me somehow seems to attribute back to that. 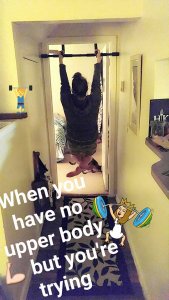 I do a lot more of listening to my body now. If I get tired or physically uncomfortable, I analyze what I’ve eaten. I’ve added more small exercises, therefore gained some muscle. I’m the happiest I’ve ever been with my body. I’m not where I want to be but I’m so proud of the progress I’ve made. I give a blue ribbon to my back for most improved.

In order to get where you’re going, always be your own advocate. No one will ever care about your health the way you do. If you think something is wrong, don’t become a victim of circumstance. Don’t wait for someone to work extra hard to figure it out, make your own discoveries. It’s also important to enjoy the ride and give yourself credit for every show of progress. I’ve never made progress being hard on myself but allowing freedom has helped me slowly ease into a better figure. I am still working towards my goal but taking a new approach has made all the difference.