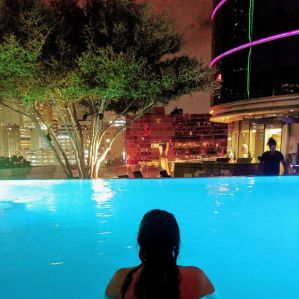 March has arrived! That means trip #3 is in order. I’ve had a lot of busy this month. Last week I had a friend fly in for a long weekend and we stayed in the Omni hotel in Dallas. My favorite part of that stay was getting in the hot tub and looking over downtown in the morning. I am not a morning person but hot tub is really the best way to wake up. We also got to swim at night in a slightly heated pool looking at downtown as well. There’s 6 restaurants basically on campus so from the fine dining to more budget friendly eats, there’s options.

So that takes us to 1 week later when I set my sights for Carlsbad Caverns National Park. Google Maps said it was just over 6 hours. My soul’s GPS said it was more like 8 hours. How long did it actually take? A little more than 7. One of the best parts of the longer than anticipated ride out there was this never ending, long stretch of night. There aren’t lights on some parts of the road so aside from what your headlights show, you have no idea what’s surrounding you. At one point, I pulled over and turned my soul’s lights out and stepped outside to have my mind blown. There in front of me was the most glorious night sky. More stars in the sky that I had ever thought of seeing. You always hear that in remote areas out west you can see that. This was my first time. This is coming from someone who regularly takes photos of the moon and planets showing up in the sky and I have owned a telescope for years. THIS was just everything. It felt like I was in perhaps an observatory because I had never seen the sky so full of stars. It was amazing.

So, I finally arrived at the hotel around 2am. I hadn’t been to a hotel that locked the doors after a certain time so waiting outside for 10 minutes wasn’t cool. Once again, I stayed a good long distance north of the caverns at Hampton Inn Artesia. To be fair, I thought it was way closer. The address I got from the caverns online was not the actual address of the visitor center so I have learned a lesson to never take an address off face value. I will say it was a pretty small town but a little more lively than Davis, OK. The hotel was pretty new and taking a short walk would take you to downtown. There’s nothing really open late, luckily I had brought a plethora of snacks. I stayed two nights and I will say that the room was quite spacious and the breakfast was a fresh bar and there was different food both days. Would definitely recommend. From the southeast part of NM I was in, it was very dusty and I saw legit tumbleweeds pretty often. Before I went into the caverns the sky was nice and blue and you could see for miles. When I got out, the sky was white and you could barely see pass the parking lot.

A few things to make note of. In order to go tour the caverns, you have to have purchased your ticket before 2:30. The park closes at 5 so taking your time is not an option. Also, do NOT attempt going to explore the caverns using the elevator first. Walking the OPPOSITE direction is very physically challenged, even for the most fit. I saw kids and adults a like struggle to make it because they thought they were taking a shortcut. It IS NOT a short cut. You can access the elevator from the visitor center. If that happens, accept you’ve made a mistake and go right back up and walk through the right way. It’s specifically designed to be followed as such for a reason. There are also 2 gift shops so there really is plenty of gifts for everyone. If you need to eat, there’s quick grab sandwiches and a deli style hot food option. That closes closer to 4 so eat before you go down. Be careful not to bring anything with lots of lint or hair on it. Apparently the loose hair is damaging to the caverns so watch out. You can’t bring any food or beverages other than water. So, let’s start walking! 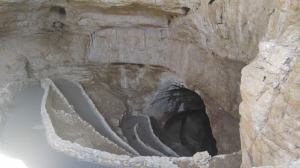 About the walk down the cave, I’d like to say I started out a slight bit nervous. What if I got claustrophobic? What would happen if I couldn’t go on? Luckily, it was a perfect walk – when going the right way as mentioned earlier. The space inside the caverns was wide open and there were only a couple of instances where the walls got anywhere near close but nothing was ever a squeeze. So, never fear, the coast is clear. The walk itself was just under 2 hours. You go at your own pace but be extremely careful to take note of the ground. There are wet spots and sliding would not be good. Fortunately, there are lights all over the inside so it’s never really difficult to see where you’re going. Even still, feel free to keep your smartphone handy to turn on a flash light if necessary. Most of the trail was a sort of downward incline (which is why walking in reverse sucks) so it’s easy for all ages. To see all the photos from inside the caverns, check out the album here.

Check back next month when I head out to Orlando, FL for Star Wars Celebration!