Less than 2 hours from Atlanta or Nashville, a very budget and tourist friendly place to visit resides in the south east corner of Tennessee called Chattanooga. Surrounded by the Appalachians, Chattanooga is probably most notable for the mountain that towers over the city. Most notable about the mountain, aside from the attractions, would be the fact that there’s an entire world up there. Neighborhoods, schools, even a Starbucks. You could probably live up there and never come down out of the clouds to the world below.

This guide is perfect for a day or weekend trip. I did the whole weekend for less than $200, including a 2 night hotel stay. Below is the trip that I made plus extra activities that you could switch out or stay an extra day to enjoy! So, let’s get our engines started!

Day 1 – Lookout Mountain, Bud’s Sports Bar
How could you read the first paragraph and NOT want to drive up Lookout Mountain? One thing I must mention here is that address and GPS might get confused. I set out looking for the entrance to Lookout Mountain but got Lookout Mountain Battlefield Visitor Center. Not being from around the area, I didn’t know that wasn’t what I was trying for. Chickamauga & Chattanooga National Military Park has within it Lookout Mountain Battlefield Visitor Center, 25 minutes in the wrong direction. There are technically 2 national parks by the same name – 1 in Tennessee and 1 in Georgia. It wasn’t so bad, the Georgia side has what I dubbed ‘monument row’ for the extensive amount of statues in relation to the Civil War. It was definitely an interesting drive and great landscape – just not what I was …looking out.. for. Get it? 😄 Okay, moving on.

I say all of that in order to avoid having someone else make the same mistake. To get on top of the mountain and get the majestic views overlooking Chattanooga, here’s the address to put in your GPS:
110 Point Park Rd, Lookout Mountain, TN 37350

You are at the right place when the entrance is a castle style gate. Feel free to take different directions on the mountain as well before parking. There’s so many beautiful homes, golf courses, and as I mentioned – normal life. Once you get there, the parking seems limited and it is a park and pay at kiosk situation. I went during the government shutdown so I can’t say how much it costs but likely nominal. I would give at least 2 hours to walk around and take in the heights. There’s several trails that split off and wrap around the edge, plenty of scenic photo ops. 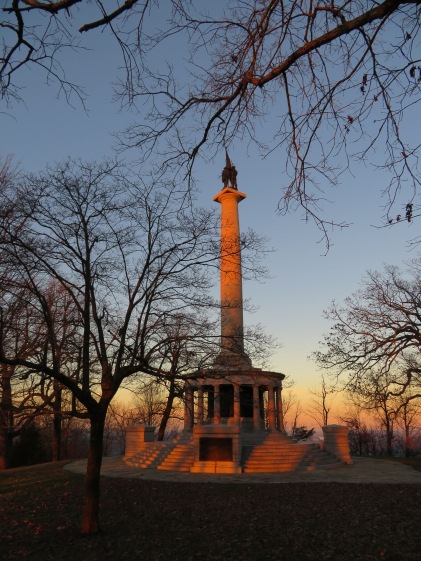 There’s also the New York Peace Monument, which features a confederate and union soldier on top shaking hands. Around the inside, that you can see here, are the names and infantries of those who were from New York and perished during the American Civil War. It’s the highest point from where you can see so far and so wide. There is a trail on the opposite side of the monument that starts the wrapping around of the mountain. This view is actually what you get once you enter the gate and start walking forward, quite prominent.

After all the walking and exploring, you’re probably in the mood for some nomz! I just so happen to be in town during the NFL playoffs and was hoping to find a place to watch the Cowboys game and boy did I pick the right one! Bud’s Sports Bar was easy to get to and had just so many TVs that both my booth-mate and I had a view behind each other’s head. More importantly though was one of the best items I’ve had, which was Grouper Fingers ($8). This was served as an appetizer with fries and I’ve been dreaming about it ever since. I hadn’t had grouper before but I discovered later that this is a popular fish to serve in the area. However, it’s hard to imagine someone else beating the lightly battered and perfectly flavored dish. We loved them so much, we were going to go back and order a couple more baskets but ran out of time. Wish I had taken a photo so I could put it on my vision board.

Day 2 – Ruby Falls, Portofino’s Greek & Italian Restaurant
Thought you were done with the mountain because you got all the scenery? Well, now we’re going inside to see Ruby Falls! Due to the fact that I had gotten lost yesterday, today I needed no directions to get to the correct entrance. It should be noted that you might want to evaluate your claustrophobia before going down into the caverns. 2 years ago, I traveled to Carlsbad Caverns and there was never once a tight squeeze. I can’t say the same for Ruby Falls. There were a few times I took a very quick pause to remind myself to breath. By the end, I had no actual problems and enjoyed the walk. It takes a touch over an hour round trip. To be fair, the founder Leo Lambert (who named the falls after his wife) crawled in a space just barely big enough for him to squeeze through on his stomach in order to discover the falls. Luckily, he came upon this 145ft underground waterfall and was able to find a way to share it with the world. There’s a lot of history about the space, to find out more click here. Tickets start at $19.95 for adults.

Once again, there is food to be had. Another unforgettable meal is about to take place if you venture to Portofino’s Greek & Italian Restaurant. Everyone always obsesses over Olive Garden’s breadsticks (except me) but the ones at Portofino are legit (free).

If you don’t want to reach into the screen and grab this, I just don’t get you. This deliciousness was so soft on the inside and ever so lightly browned on the outside. I’d come back just for a basket of these. The food was just as delightful as I ordered the moussaka ($11.95) and it was perfection. If you are a wine lover, they have a full menu of wines as well as suggestions in case you are un-knowledgeable like me.

Rock City
Up on top of the mountain is popular Rock City attraction with some glorious overlooks that can only be gotten to by entering here. Along with the scenery, there’s nature walks, seasonal events, and lovely gardens. Tickets start at $16.95 for adults.

Tennessee Aquarium
As far as aquariums go, this one is quite nice nestled in downtown in a very modern space right on the river. The marine life are beautiful as is the learning experience for all. Tickets are $34.95 for adults.

You might be wondering why I didn’t give any tips on the nightlife. Well, as far as I could tell, there wasn’t one. Driving through downtown Chattanooga after 10pm, I quickly realized that there wasn’t anything going on. In fact, I only saw 2 other cars. I know for sure there was at least 1 bar open. So, if you’re looking for entertainment, a bar is likely your best bet.

To check out more photos from the trip, click the link here. Otherwise, let me know if you have any questions and feel free to give me a follow on my other platforms such as Facebook or Instagram! Don’t forget to say, “Hello!” 😃